Quiet and stealthy, unlike the people on Exmouth beach

Sightings of massive vessels in the Channel have become more frequent since lockdown, but still it’s not every day a Royal Navy support ship stops off in Lyme Bay.  We’ve had cruise ships unable to take passengers and merchant navy vessels unable to disembark their crew. But now Auxiliary Oil Replenishment ship RFA Fort Victoria is visible from beaches around the Exe and Teign as she takes a breather and a bit of sun. With temperatures of 27C in Devon today, the crew could be forgiven for thinking they were in the Med.

The ship was in Devonport on Saturday and has spent much of Sunday in Lyme Bay. The 33, 675 tonne vessel with a top speed of 20 knots hasn’t much activity going on around her, other than some pleasure craft and fishing vessels. According to the Royal Navy, RFA Fort Victoria is “quiet and stealthy, despite her huge size” and she “was originally designed to support frigates on anti-submarine warfare patrols.

“She provides vital support to the wider fleet by acting as a stores ship and a fleet tanker. Fort Victoria is fitted with four central replenishment rigs, so she can replenish two warships simultaneously with fuel and stores. What’s more, she has another refuelling rig at her rear – though this isn’t the fastest way to refuel and restock, it is much safer in bad weather.

She also has a large flight-deck, hangar and maintenance facilities for helicopters – much-valued when it comes to keeping [the Royal Navy] powering at mission speed.”

As a Royal Fleet Auxiliary vessel, she’s operated by the support branch of the Royal Navy, “providing vital logistical and operational support to military operations.” 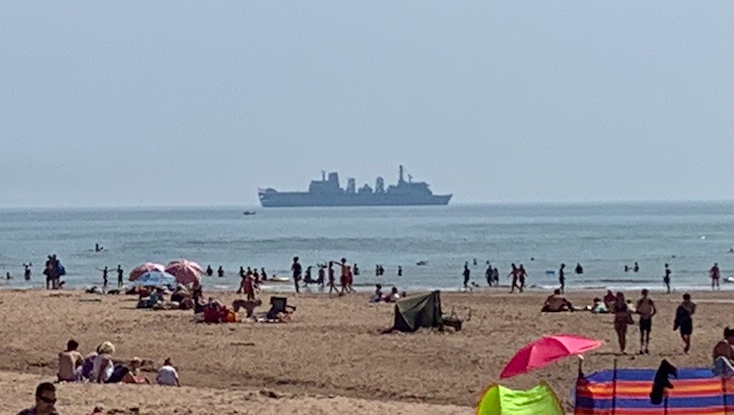 12 areas of Devon have had no covid deaths