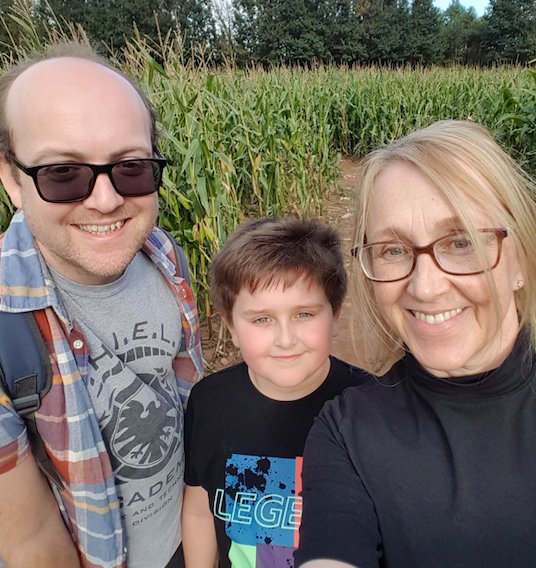 A Church of England priest and his family may have to wait months for their home to be fully repaired, after it was badly damaged when a Second World War bomb was detonated just metres away in a controlled explosion.

The Reverend Ash Leighton Plom and his wife and son live in the property closest to the field in Exeter where the bomb was discovered on Friday 26 February.

In what could be described as a curate’s egg, the bomb has brought out the best of people in trying circumstances, with the military and emergency services being lauded as ‘heroic.’ No one was injured in the massive blast that rocked Exeter after the detonation on Saturday evening, but many families have been affected, as have several hundred students who are unable to return to their accommodation.

The Ash family was forced to evacuate their home along with thousands of other city residents and university students after the device was found by builders.

Their house, which is a church property belonging to the Diocese of Exeter, suffered damage to the roof, doors, windows and walls in the blast.

Reverend Ash, who is a curate at St David’s Church with St Michael’s Mount Dinham in Exeter, said: “I was actually leading morning prayer from the church when the bomb was found and my wife and son were told to leave the house.

“We were praying for the brave team who worked to disarm the bomb, for all the services and volunteers coordinating to help us evacuees, and for all the residents affected. It was very hard being worried about it but unable to do anything.”

The family relocated to a local hotel along with dozens of other evacuees. He said “People were being very kind to each other. My thoughts and prayers are with those who don’t have the benefit of a loving church network around them.

“We’ve been doing what we can, mainly helping with the multi-agency effort, finding accommodation and supplies for people, and a fair bit of pastoral ministry.”

Urgent repairs to the family’s home have now been carried out and they are back there temporarily but will need to move out for several months while more major renovation work is done. 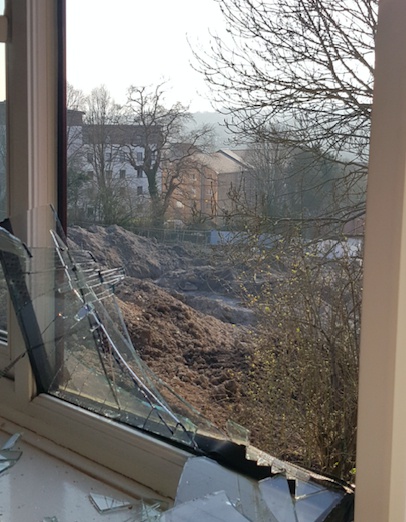 The bomb crater can be seen from the damaged home of the Leighton Plom family (courtesy: Deborah Leighton Plom)

“It was a relief to see the house, because it was easy to imagine the worst before we got in there,” Ash said. “Even though it was difficult to see the state of things, it was also helpful to see it wasn’t as bad as it could have been. Especially after seeing the dramatic footage online.”

The Archdeacon of Exeter, the Venerable Andrew Beane, said “Whilst we are thankful to the emergency services and military for their heroic efforts to ensure the safety of residents following the discovery of the World War Two German bomb, we are deeply concerned for the wellbeing for those residents whose homes have been damaged by the controlled explosion.

“We are working with Ash to care for his and his family’s pastoral needs, as well as provide practical and financial support. We are exploring a number of options with regards to finding a temporary home as a matter of urgency.”

Churches in Exeter have been working with the council to offer support to those affected by the bomb.

Andrew Beane said: “It was particularly moving to hear of a Syrian refugee living in the city offering support, saying they also have personal experience of being bombed out of their home. It’s a reminder to us all that there are those facing the cruel effects of war everyday across the world.

“Our prayers are with those who have been affected here in Exeter and with all those working for peace in places of conflict in other parts of the world.”

Exeter leader: no ‘day of freedom’