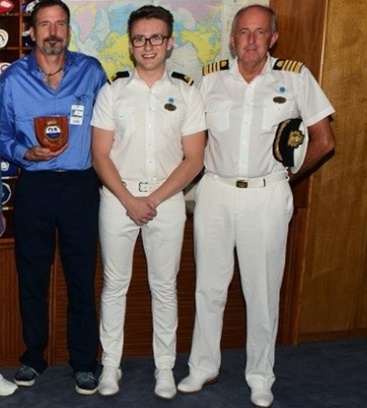 A Devon man is the youngest person to receive the Merchant Navy Medal after a dramatic rescue in rough seas in the Caribbean in which he saved three people from drowning.

Max Bingle, 24, is honoured along with 19 other sailors from the cruise ship Sea Princess for “outstanding service and contribution to the sector.”

Mr Bingle was third officer on the ship which was on a world tour when it received a distress call from the coastguard alerting them to a sunken vessel 60 miles away, with three men in peril.

Mr Bingle told Sky News; “I was on the bridge with a senior officer when the call came through. It was a team effort and we had to navigate to the vessel’s last known position. There was a tanker standing by, but it was unable to recover the life raft.

“There was a coastguard plane overhead directing us and at around a mile away, we went down into the rescue boat….and dropped into the water. We then sailed around three-quarters of a mile to the life raft to recover the men. It was pitch-black and a force-eight gale.”

Mr Bingle told the BBC that saving sailors in distress is what he was trained to do.

Maritime minister Robert Courts said everyone who received the Merchant Navy Medal had gone beyond the call of duty.  He said: “It’s a special honour to award the medal to Max, it’s youngest ever recipient.

“He showed incredible bravery in saving three fellow sailors from drowning in rough seas, and this award is a recognition of his incredible selflessness that night.”

Jack Nowell out for 6-8 weeks