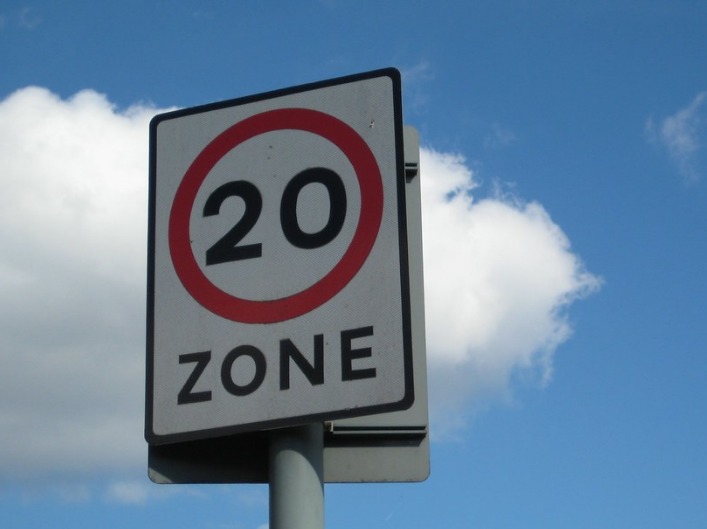 Trial could take place next year

Teignbridge District Councillors have thrown their support behind proposals for a 20mph speed limit on almost all roads in Newton Abbot.

The Devon County Council trial is set to be carried out in 2021 and will allow the testing of the potential impact of an area-wide scheme.

The trial would follow the success of limited speed limits imposed in Portsmouth, Oxford, Bristol, Warrington, Islington and Hackney, and if the Newton Abbot trial is a success, then it could be rolled out to other parts of Devon.

Putting forward the proposal, Cllr Jackie Hook, portfolio holder for climate change, said that excessive speed is one the issues that councillors are contacted most often about, and “these complaints should be taken seriously as the concerns are backed up by tragic statistics.”

She said: “This is about creating a safe road network to encourage people out of their cars for short car journeys where they can walk or cycle. Why are we not appalled by the fact we have created a dangerous environment that stops out children from being able to travel to school on cycles or foot?

“It is important that we see this initiative as part of the solution to tackling congestion. That creates frustration and rat running and then excessive speeds when roads are clear. The more people we can get out the car for short journeys, the more the roads will be freed up for those who do need to use their cars.

“These are a low-cost highway measure but with huge benefits, not just about saving lives but there is an economic uplift in these communities from a very small cost.”

Cllr Colin Parker said that he couldn’t believe anyone doesn’t want to reduce the number of serious accidents which speed has a major bearing on it. He said: “Not all will adhere but they will reduce their speeds from what they did previously, and people will be safer, and it will improve the image as a safe and welcoming town.”

Cllr Richard Keeling said that he hoped the trial would be a success so it could be rolled out to all parishes and towns in the area, while Cllr Martin Wrigley added that a lower speed of cars ends up with a greater flow, and would see people move quicker from A to B and ease congestion.

In Ipplepen, a 20mph speed limit in the village was introduced several years ago, and Cllr Alistair Dewhirst said that while not every driver sticks to it, it has made a huge difference to life in the village. He added: “It is not just about cars but it has a massive impact on the amenity in the area as people feel comfortable to walk and cycle.”

The trial is due to take place in 2021 but when it was discussed by Newton Abbot town councillors earlier this year the areas were limited to the town centre, around schools and residential streets, but now it could also apply to major through-routes including A roads the town council has expressed concerns about.

Town mayor Cllr Richard Jenks said: “We need a balanced analysis, a body of evidence we can properly look at and scrutinise. It is clear that with a decision like this, which would have an impact on 100,000 residents as well as our businesses and visitors, that we must know what it is we would be signing up to.

“Yes, as a town council, we can see some safety and potentially environmental benefits from lower traffic speeds and would welcome these, but we do need to understand at what social and economic cost they might come.”

The intended timeline is for traffic data collection and surveys, and initial consultation and promotion to take place in the first half of 2021, with formal advertising of the trial taking place late 2021, but Devon County Council would make the final decision ahead of the changes.