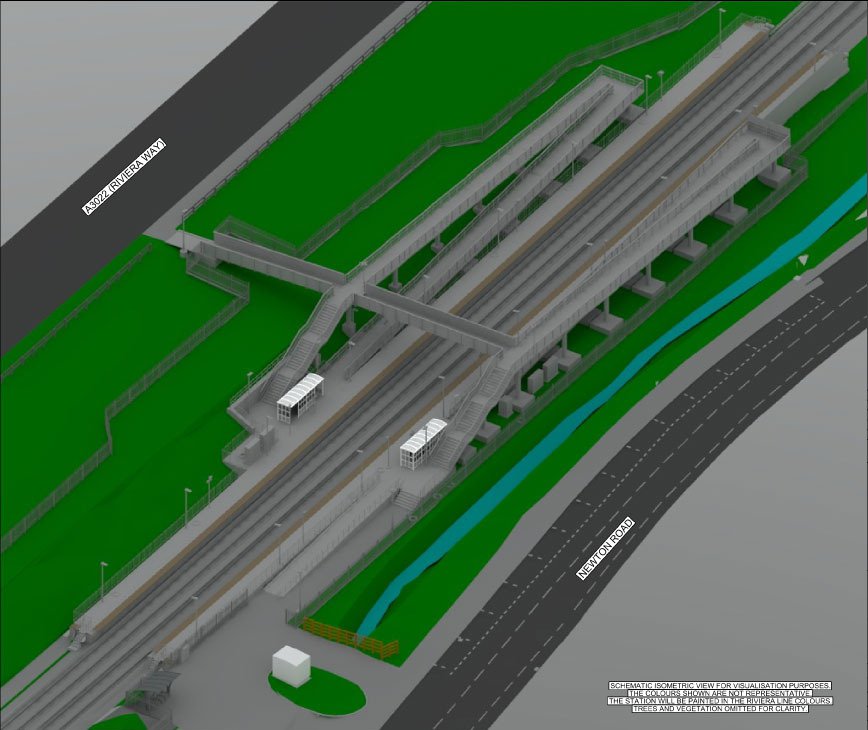 Some people can work this plan out (courtesy: Torbay Council/LDRS)

Work on Torquay’s new £13 million rail station is expected to start in the spring of 2022.

The estimated cost has risen by £4 million since the halt at Edginswell was given planning permission by Torbay Council in November 2016.

The three-year consent expired a year ago and a new application will have to be submitted for the scheme. The project with an estimated cost of £9 million in 2016 was put on hold after it missed out on government funding in 2017. But a fresh bid for support this summer backed by Torbay MP Kevin Foster has now been successful.

More details about the proposals emerged in a statement from Torbay Council after the government announced approval for £7.8 million funding in the Spending Review.. The council said the remaining £5.3 million would come from its own resource and there was a sum allocated in the Town Deal for Torquay – a set of regeneration projects backed with £22 million of government funding.

The council statement welcomed the funding decision and said the station on open land between Newton Road and Riviera Way was expected to be completed in the winter of 2023/24.

It would be owned by Network Rail and run by the train operation company currently Great Western Railway, which runs services on the line between Paignton and Newton Abbot.

The statement said: “The brand new station which would be known as Edginswell, will have a wide range of local benefits including creating travel, employment and housing opportunities in Torbay’s largest and most strategically important urban extension which will deliver over 550 new homes, 37,000 sqm of commercial space and a new school.

“Torbay Council submitted a bid to Network Rail and the Department of Transport back in June as part of the national New Stations Fund. The bid set out proposals for £7.8 million of funding against a total estimated cost of almost £13.1 million, the remaining of which will be from council resources and an allocation will be included within the Torquay Town Deal funding bid.”

The council’s cabinet member for regeneration Swithin Long said it was predicted that every £1 invested would produce a benefit to the economy of almost £7.

Cabinet member for infrastructure Mike Morey said the station would be part of developing a low-carbon sustainable transport system to tackle climate change.