Remind me, why do we need a new school?

Plans for a new 210-pupil £7.2 million primary school in Ottery St Mary have been submitted to East Devon District Council.

Flood-threatened Tipton St John C of E Primary would re-locate to the new building at Thorne Farm, where they will be joined by Ottery St Mary children who currently have to travel elsewhere because there are no places for them in Ottery. Up to 150 homes could be built to help pay for the new school, of which 30 per cent would be affordable.

The plans have been prepared by Devon County Council which held a public consultation on the proposals last year. A number of fundamental changes have been made to the original plans as a result of the public’s feedback.

A junction to access the Thorne Farm site has now become a roundabout, the proposal to make Cadhay Lane access only has been removed and the footpath from the site will now join up with the existing network. Proposals have also been announced to improve the area around the King’s School and the leisure centre.

James McInnes, Devon County Council’s cabinet member for schools, said: “We’ve listened very carefully to local residents and have made a number of changes as a result of their input. A lot has happened with covid-19 since we held the public consultation and I believe that this multi-million pound injection into the local economy couldn’t come at a better time.

“If we are to build ourselves out of recession then what better way to do it than by providing the most modern educational facilities for our children, who have been among the worst affected by the pandemic.”

Mr McInnes said attempts to re-locate the school within Tipton itself had been unsuccessful. He added: “We have a growing demand for primary school places in Ottery St Mary. Currently neither the county council nor the diocese has any money to fund the significant shortfall of around £5 million to build the new school.

“Without some new housing development, I fear we will not be able to relocate Tipton school and remove the very real threat to the children there from flooding.”

The new building would be twice the size of Tipton with 210 places and would be able to admit more children from Ottery. Currently nearly twice as many children travel from Ottery to Tipton St John to go to school as there are pupils from the village. Another nine children from West Hill are currently at school in Tipton.

Colin Butler, executive head teacher for Tipton St John Primary School, said: “We’ve been living with the threat of flooding at Tipton St John for some time. The governors have agreed to relocate the school as it is just not feasible to build a replacement in the village.

“This proposal would more than double the number of children who could benefit from what we offer as a Church of England school and mean all our pupils could enjoy bright, new, purpose-built classrooms and all the ancillary facilities a new development can offer.” 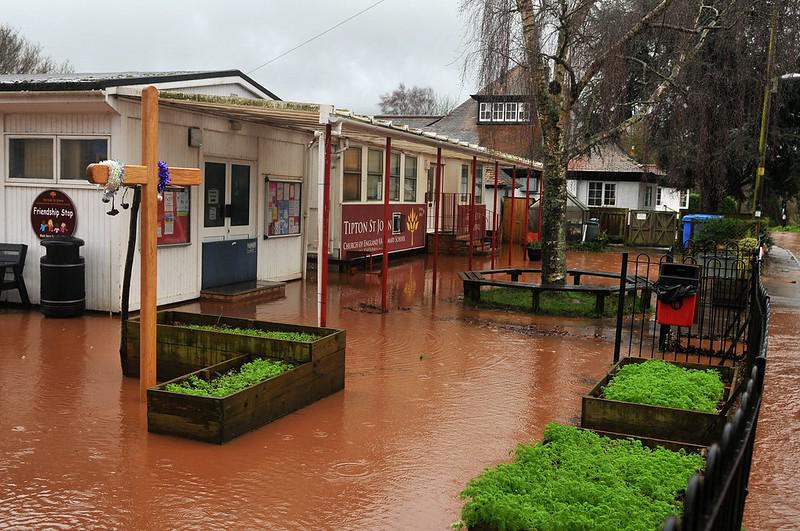