Subsequent to their 1-0 away loss last week, a resilient Exeter City side bounced back superbly to beat Colchester United 3-1 in the play-off semi-final second leg, winning 3-2 on aggregate.

Aaron Martin and Jayden Richardson scored goals inside 90 minutes before Ryan Bowman fired home in the second half of extra time to seal the dramatic victory.

The Grecians will now face the winner of Northampton vs Cheltenham, who play later this evening, at Wembley stadium in what will be Exeter’s third play-off final in four years.

Although City fans couldn’t physically attend the game due to the coronavirus pandemic, they were there in spirit. More than 1,200 supporters had their own conspicuous cardboard cut-outs that were scattered across the iconic Adam Stanfield stand – none of which invaded the pitch at full time!

Taylor strongly emphasised that his side needed to “improve their possession” following the narrow defeat last week. That’s exactly what Exeter did this time out.

City had Colchester firmly on the ropes for much of the half – and the Grecians took a deserved lead within 10 minutes. Aaron Martin was the unlikely provider. Jake Taylor’s deflected shot inside the box landed fortunately at the feet of Martin who smashed home from five yards out.

Randell Williams, who’s got the most assists in League Two this season, nearly replicating Cohen Brammal’s first leg goal with a free kick on the edge of the box. The winger curled his effort over the wall from 30 yards out – but he was denied by a mesmerising fingertip save from the keeper.

A vigorous Williams was at the heart of the action soon later and had two more glorious chances to take the lead. The winger headed Dean Moxy’s ball over the bar from close range before skimming the post with a curling effort just outside the box.

The visitors grew into the game late on and looked dangerous in the final third. Maxted was required to palm away a rare effort on goal soon after Luke Gambin blasted a shot just over his bar.

Just 15 minutes into the second half, Jayden Richardson fired City into the lead after a rapid start. Bowman hit the post with a header – but Richardson followed up on the rebound and squirmed the ball under Dean Gerkin.

All of a sudden, the momentum swung in favour of the visitors. Immediately after scoring, City were on the back foot. Kwame Poku blasted a shot over the away stand, Maxted tipped a looping cross over the bar and Frank noble shot miles wide from a good position in the box – Exeter weathered the initial storm well.

But the waves of attacks kept coming, and after defending so well for so long, City finally conceded. Exeter failed to clear their lines from a cross as Courtney Senior smashed the ball past a few City players and into the net.

City supporters watching from home were made to panic when Courtney Senior beat Maxed with a 20-yard shot – but it was directed just wide of the far post. City were struggling to get a foot hold in the game.

Maxted made an unbelievable close range save to keep the tie all square in the 90th minute. A rapid break from the visitors left Kwame Poku with just the goalkeeper to beat – but City’s number one came out on top. City blew another huge sigh of relief.

The game ended 2-1 (2-2 on aggregate) taking the game into extra time.

With legs tiring, and neither side wanting to take too many risks, chances were hard to come by. Exeter’s best chance, though, fell to Bowman in the 100th minute. Substitute Brennan Dickenson fizzed a ball into him which was guided wide of the post.

City’s final subsite, Nigel Atangana, made an impact off the bench too. His long-range effort had the keeper rooted to the spot, but the ball went well wide of the goal. As the half time whistle blew it remained goalless.

The game was on a knife edge heading into the final 15 minutes. However, In the 110th minute, Bowman sealed the tie with a neat left footed finish into the bottom corner to take Exeter to Wembley.

It finished on aggregate: Exeter 3 Colchester 2 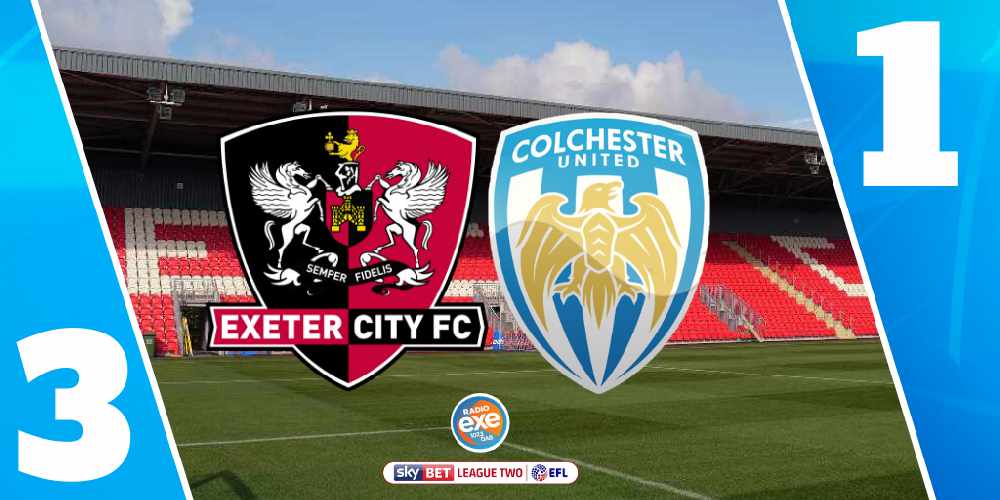 “Time to celebrate our fishing industry”