Lance Corporal Jacob Mellor, 19, from Exeter, had an important role on Friday at the funeral of British icon and national treasure Dame Vera Lynn. He was one of twelve members of the military route Lining Party, as the coffin was carried into the crematorium in Brighton.

Commenting on what it means to be selected to support Dame Vera’s funeral, Lance Corporal Mellor said; “To me it is important that we pay our respects to Dame Vera in this way, who has done so much for the military over the years. She has helped lift the spirits of so many, and whilst a sad occasion, I am proud to be fulfilling a ceremonial role that pays tribute to Dame Vera”.

Jacob Mellor is a section second-in-command in Number Seven Company Coldstream Guards, having joined the Army the years ago. He is currently based in Wellington Barracks, next to Buckingham Palace in London, and his primary role is ceremonial; guarding Royal Palaces, and providing State ceremonial onsState occasions, such as the guard of honour for the visit of French President Macron recently.

When British officers imprisoned in Colditz were liberated by the Americans at the end of the war, it was to Winston Churchill, President Roosevelt and Vera Lynn that they raised their glasses.  Dame Vera Lynn, the forces sweetheart, passed away at the age of 103 on 18 Jun 2020,.Her funeral in Brighton took place close to her family home in Ditchling, Sussex. Earlier this year, Dame Vera was named the Briton who best exemplified the spirit of the 20th century.

Her son-in-law, Mr Tom Jones, a retired squadron leader in the RAF, approached his former Squadron in Odiham requesting military support, including a flypast.  This presented a unique opportunity for the military to acknowledge Dame Vera’s support to the Armed Forces as a singer, songwriter and entertainer throughout her life, especially during World War Two, but also her subsequent charitable work which her family estimates raised £50 million for service charities.

Ratings from the Royal Navy, guardsmen from umber Seven Company Coldstream Guards, and airmen from the Queen’s Colour Squadron RAF provided a bearer party and accompanied the cortege as it passed through Ditchling Village earlier. The hearse paused in the town centre to allow residents to pay their respects. As it paused, standard bearers from the Royal British Legion who had been mounting a vigil at the crossroads, dipped their Standards, and the Battle of Britain Memorial Flight performed a flypast overhead.

Personnel from all three armed services lined the entrance to the chapel of rest as the cortege arrived at the cemetery. A small family funeral service took place in line with government guidelines. A gugler from the Royal Marines provided musical support.

Beginning one’s infantry career with ceremonial duties hones discipline, attention to detail, courage and confidence which help make our operational Guardsmen among the finest combat soldiers in the world.  The Company maintains its combat military skills, with regular training exercises outside London, and overseas adventure training. The Coldstream Guards are the oldest Regiment in continuous service in the British Army having been raised by General Monck in 1650 and boast an impressive 113 Battle Honours, 13 Victoria Crosses, and one George Cross.

For all military personnel at the funeral  it was an honour to be involved in tribute to someone who is held in such affection by WW2 Veterans, and is someone whom Her Majesty The Queen called a ‘National Treasure’.

Military involvement with civilian funerals is historically only authorised in exceptional cases. Dame Vera has an unparalleled standing within the military community and wider society so to honour her in this way, in particular in the year we celebrate the 75th anniversary of the end of WW2, was deemed appropriate.

Warrant Officer Class One Garrison Sergeant Major Andrew ‘Vern’ Stokes, who helped design and run the military ceremonial aspect for the day, said; “Dame Vera has played such a pivotal role in supporting our Armed Forces, providing hope to all in the most difficult times when morale was waning. Having served on several operational overseas deployments over my long career, it means so much to soldiers to be able to think of home, when home is so far away, and this is how I will remember Dame Vera’s contribution. I am honoured to be coordinating the support of our Tri-Service guard at her funeral, to provide a fitting tribute to a national treasure”. 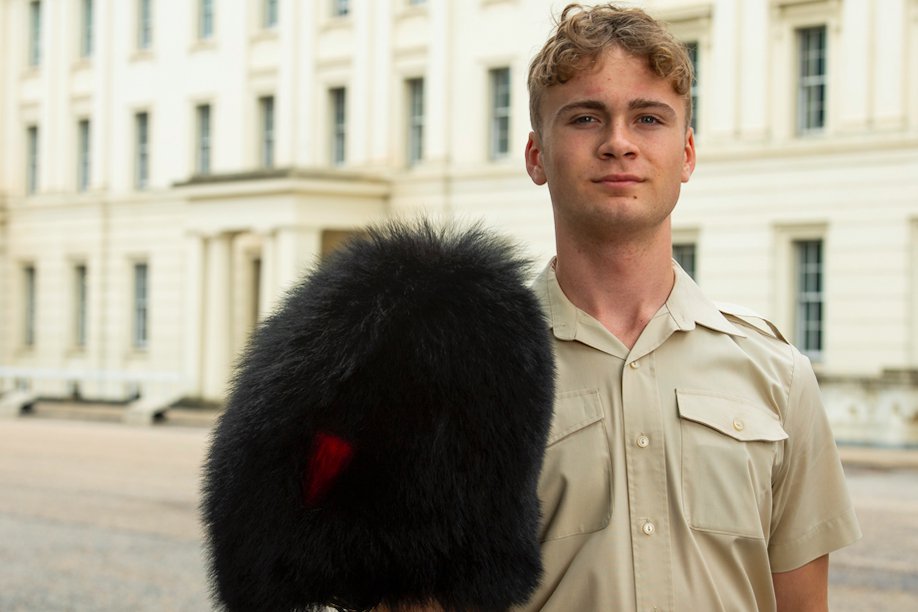 So was their dog Radio Exe: Local News …