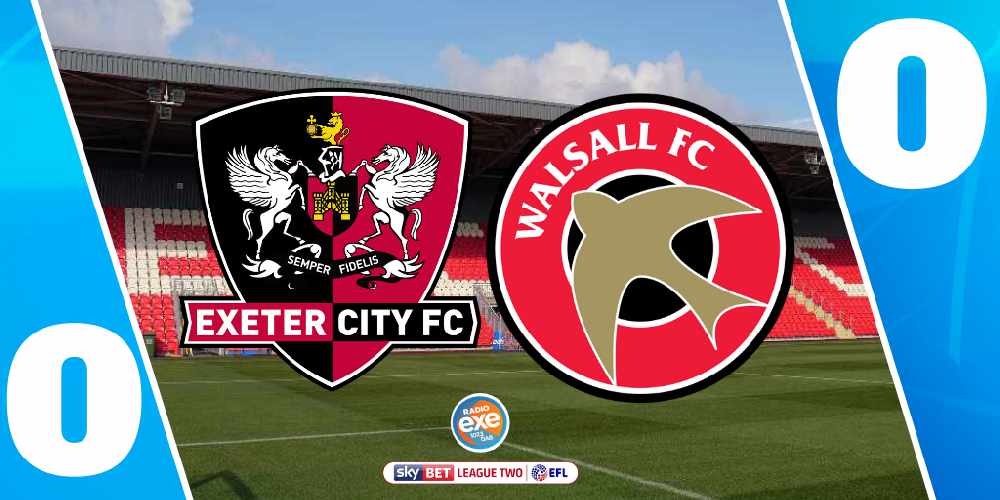 Exeter City were held to a frustrating goalless draw against League Two strugglers Walsall under the floodlights at St James Park – In what was Exeter’s first home game in five weeks.

The disappointed hosts could only take one point from the saddlers, who haven’t won in six games, but they stay in the promotion hunt, still with an important game in hand.

The hosts started brightly early on; Exeter dominated possession and had a strong penalty appeal turned down before Robbie Wilmott saw his promising shot blocked inside the box.

Matt Jay and Joel Randall both had shots on target that were well saved too – but it was Josh Key who had the biggest chance of the half. The young fullback headed agonisingly wide from five metres out.

The visitors struggled to create attacks of their own, but they did come close through Caolan Lavery. Walsall’s forward latched onto a long through ball, only to have his rare shot well blocked inside the box by McArdle. It ended goalless at half time.

City thought they had the perfect start to the second half; McArdle headed the ball into the back of the net following a freekick from Jay – but the linesman put his flag up for offside.

Exeter came close to breaking the deadlock once more midway through the half when Randall saw his powerful shot saved from a tight angle – but in reality, a scrappy second period featured very few chances. A disappointing result for City as it ended goalless at St James Park.

The Grecians are quickly back in action on Saturday as they face Leyton Orient.