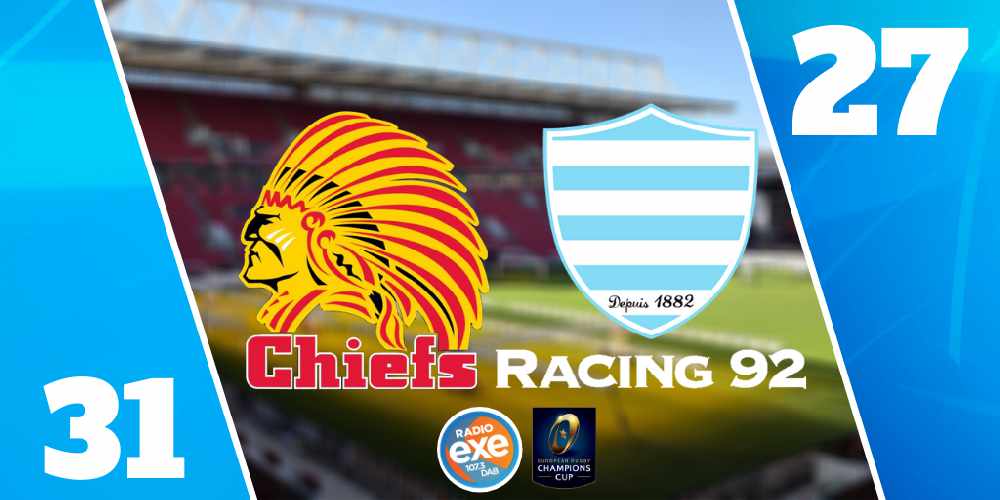 Exeter Chiefs win the European Champions Cup for the first-ever time, ten years after promotion into the Premiership.

The Chiefs beat French giants Racing 92, in one of the tightest and most nail-biting finals in Champions Cup history, to crown themselves kings of Europe.

It’s been an unbelievable season for Exeter – who finished their European campaign unbeaten and scored more points than any other team in this season’s competition.

Star of the match Joe Simmonds, 23, became the youngest ever captain to guide his team to European glory.

However, for the time being, the celebrations will be put on hold – the focus swiftly turns to the Gallagher Premiership final next weekend.

🎉 And let the celebrations begin, Exeter Chiefs are champions of Europe! 🎉#HeinekenChampionsCup pic.twitter.com/amsP7op3Fa

Exeter couldn’t have wished for a better start to their historic European final – they dominated the opening 15 minutes and capitalised with two tries inside 20 minutes.

Luke Cowan-Dickie and Sam Simmonds settled early nerves as they both powered over the line from short range – Joe Simmonds slotted both conversions to give his side a convincing lead.

It looked like it was going to be a one-sided final – but the French giants, who made a few uncharacteristic mistakes early on, grew into the contest and clawed their way back into the contest.

Racing’s Simon Zebbo reduced the deficit after dotting the ball down clinically in the corner before Imoff superbly cut open Exeter’s defence with fancy footwork to touch down under the posts. Finn Russell missed the first conversion, but he made no mistake with the second.

It was Exeter who had the final say before half time, though. Again, the score was created by the Exeter forwards. Harry Williams crashed over from 2 metres out following continuous carries – Simmonds with the extras. Exeter led 21-12 at half-time.

The tide turned in the second half – a disastrous start to the half gave Racing the chance bite back within two minutes. Henry Slade gave away a penalty, for a high tackle, just 10 metres out. Opting for touch, Racing eventually worked the ball out wide to score in the corner. Russell failed to add the extras.

However, Racing gifted Exeter a try immediately after scoring. Jack Nowell intercepted a looping pass just ten metres out from Racing’s try line, the Cornishmen then offloaded to Slade who dotted the ball down with no defenders in sight.

You just can’t telegraph a pass around Jack Nowell 👊

The @ExeterChiefs winger pounces on a risky Finn Russell pass and puts Henry Slade in under the posts! pic.twitter.com/D0MiZ6dwFb

All of a sudden, just one point separated the two sides after Camille Chat peeled away from the back of a maul to score another try for the French team before kicking a penalty.

The game was balanced on a knife edge heading into the final 10 minutes – but when Exeter’s Thomas Francis received a yellow card, Racing looked favourites to steal the victory.  However, as it has been all season, Exeter’s defence was immense and the shut the door in Racing’s face.

Exeter just about did enough to keep Racing at bay – despite having a player in the sin bin – to secure their first-ever European Champions Cup win.

Thanks to Northcott Beaton for sponsoring our matchday coverage today, you can find out more about them via in the link below or on our dedicated webpage on the radio exe website.

Devon set for Tour of Britain