A Sidmouth teenager says chancellor of the exchequer Rishi Sunak has given him hope that his job may be more secure after the government’s financial statement this week.

Jamie Taylor, 19, is Radio Exe’s apprentice. His job is under threat because of the impact of the coronavirus crisis on local businesses who have cut advertising budgets that the station depends on for its entire income.

The Sidmouth teenager’s course at Exeter College is continuing by remote teaching, but he isn’t due to complete it until January. That initially made the prospect of him completing qualification precarious. The projects that Mr Taylor works on at Radio Exe have been cancelled or postponed, preventing him getting the hands-on experience that is essential for his project management apprenticeship. And he’s been furloughed, before facing the prospect of being made redundant in October.

After being interviewed about the situation on national radio on Wednesday, he was invited on BBC Breakfast on BBC-One the day after the chancellor made his statement in the House of Commons.

Mr Taylor said: “Now the government’s said companies will get some money to cover the costs of bringing furloughed staff back, I’ll be able to complete my apprenticeship at Exeter College. As well as the retention scheme helping, his announcement about Eat out to Help out will hopefully mean more people go out to restaurants and pubs boosting the economy and generating local clients and advertisers for the station”.

Radio Exe’s managing director Paul Nero says: “Jamie started as a volunteer aged 16 and became our apprentice when he left school and it would be a tragedy if he couldn’t complete his course. We’d actually found a way of making that work through the evil zero-hours contracts we’d traditionally avoided, and with the support that Exeter College gives to both employers and apprentices. Nonetheless we’re pleased there’s now a bit more breathing space.

“As a station, we’re not out of the woods with this crisis, but we are still producing 70 hours of Devon programming a week – and that’s given Jamie another good break too. He’s now presenting some weekend programme – and gaining more experience all the time.” 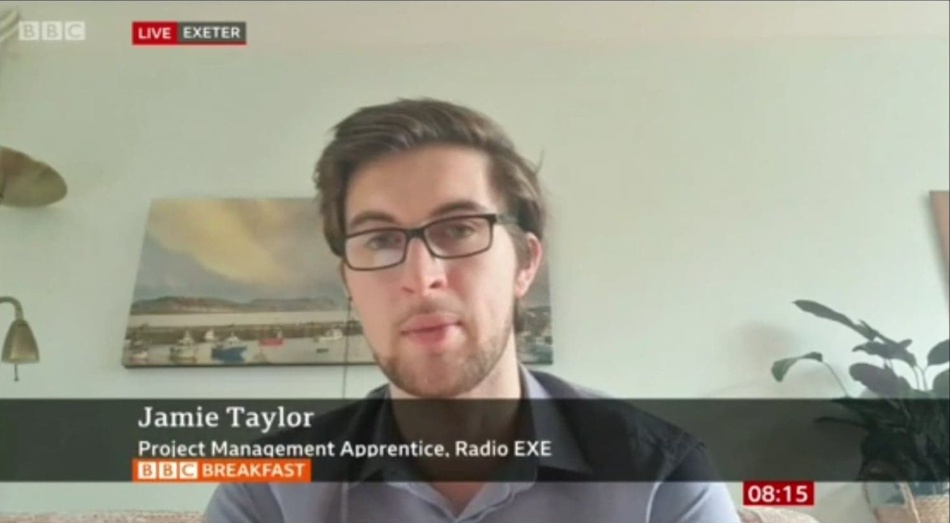