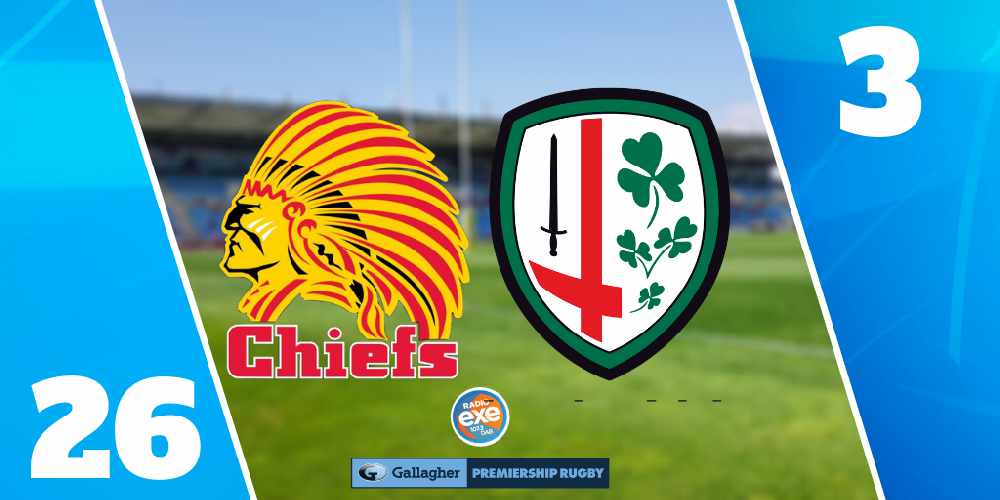 Exeter Chiefs’ rich vein of form continues as they close the gap between them and Premiership league leaders Bristol Bears to just one point after beating London Irish 26-3 at Sandy Park.

The European champions have now won their last three games, despite a handful of their star players on international duty.

In bitterly cold and windy conditions, where just about everyone allowed inside the stadium had ten layers of clothing on, both teams struggled to get to grips with the wintery conditions.

The strong wind and freezing temperatures played a huge part in a low scoring first half. It was the hosts, however, who adapted the quickest and took the lead inside five minutes. Chiefs’ top try scorer Sam Simmonds crashed over from close range, his younger brother joe kicked the conversion.

Chiefs’ Dave Ewers scored the second try of the afternoon 15 minutes later – which was created thanks to a fine break from Alex Cuthbert.

Irish responded with a successful penalty kick – but it was the European champions who led 14-3 at the break.

Unfortunately for Exeter though, captain Joe Simmonds, who converted both of Exeter’s tries, left the field with a head injury late on the first half. The young skipper didn’t recover in time to play in the second half.

The Chiefs had another explosive start to the half. Former Welsh international Alex Cuthbert, who scored a try last week, bagged another against Irish with a fine 20-yard solo run just seven minutes after the restart. Subsitute Harvey Skinner slotted the conversion in front of the posts to extend Exeter’s lead.

Things went from bad to worse for the visitors when one of their players was shown a straight red card for a high tackle. With just ten minutes to play, Exeter took full advantage of the extra player.

Man of the moment Sam Simmonds bagged his second try of the afternoon with another successful close-range drive. Skinner narrowly missed the conversion – but it didn’t prove costly.