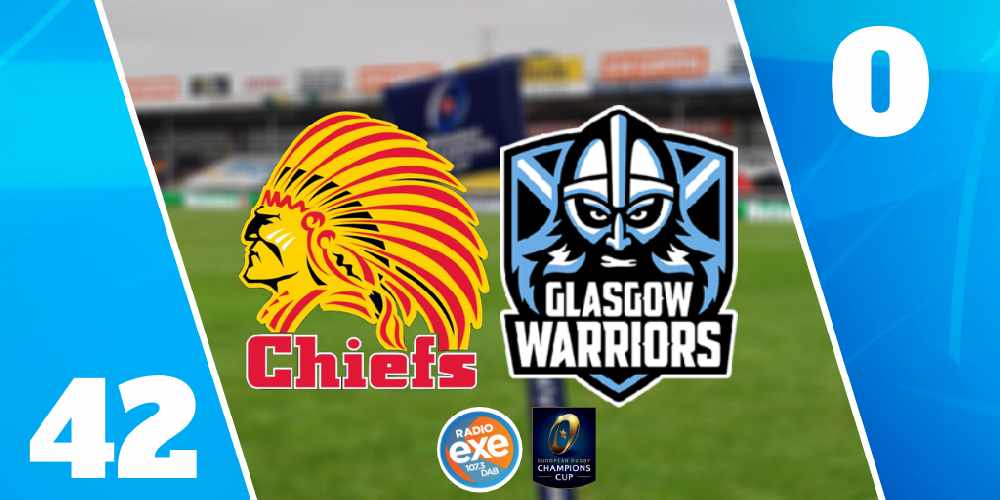 Two months ago, Exeter Chiefs lifted the European Champions Cup for the first-ever time, today, they began their title defence in style with a record-breaking 42-0 win against Glasgow in round one of the new European campaign. The result is Exeter’s biggest-ever win in Europe.

Proud Chiefs fans were welcomed back to Sandy Park for the first time since March to salute Baxter’s double-winning champions – who look a formidable force once more this season.

2,000 supporters in total braved the wet and cold conditions to watch their side inflict Glasgow’s sixth defeat in their last seven games.

Rob Baxter was given a selection boost with the return of his international stars for today’s clash; Stuart Hogg and Jonny Gray, former Glasgow players, came straight into the starting line-up as did Henry Slade and Sam Skinner.

It was Glasgow who had the strong wind behind them in the first half – but they couldn’t capitalise as they were made to endure a torrid opening period. The visitors did, however, come close with a penalty kick on halfway two minutes in – but the ball drifted just wide of the post.

Exeter’s kicking game was restricted due to the conditions, so they relied on their forwards to produce the goods – and they didn’t disappoint. Last season’s European Player of the year Sam Simmonds was at the back of a 5-metre driving lineout to dot the ball down and open the scoring, his younger brother Joe judged the wind superbly to kick the extras.

After sustained pressure inside Warriors’ 22, the European champions bagged another try ten minutes later. The forwards tired their luck from short range with continuous pick and go’s – and eventually Jonny Gray found a gap to touch down under the posts. Simmonds made no mistake with the conversion. Chiefs deservedly led 14-0 at the break.

Less than two minutes into the second half, Scotland captain Stuart Hogg finished off a superb team move for Exeter’s third try of the afternoon. Olly Woodburn made the initial break, before offloading the ball to Hogg, who scored in the corner. Simmonds slotted the extras.

Another sloppy Glashow mistake gifted Exeter the bonus point score before the hour mark. The Warriors overthrew their line out – and the ball looped over everyone straight into the arms of Jack Yandle for the easiest of touchdowns. Simmonds again with the extras.

Despite the healthiest of leads, Exeter wanted more – and they got it through Olly Woodburn. Simmonds showed good vision to kick the ball through the defence, the winger won the race, picked up the ball cleanly, and touched down over the line. Simmonds slotted the conversion.

On the stroke of full time, Exeter Chiefs were still full of energy as substitute Jonny Hill powered over the line for the seventh try of the contest. Simmonds slotted the conversion – making it 6/6 with the boot.

Full time: Exeter Chiefs 42 Glasgow 0. It’s the perfect start to the new European campaign for Exeter, who begin their title defence in style.