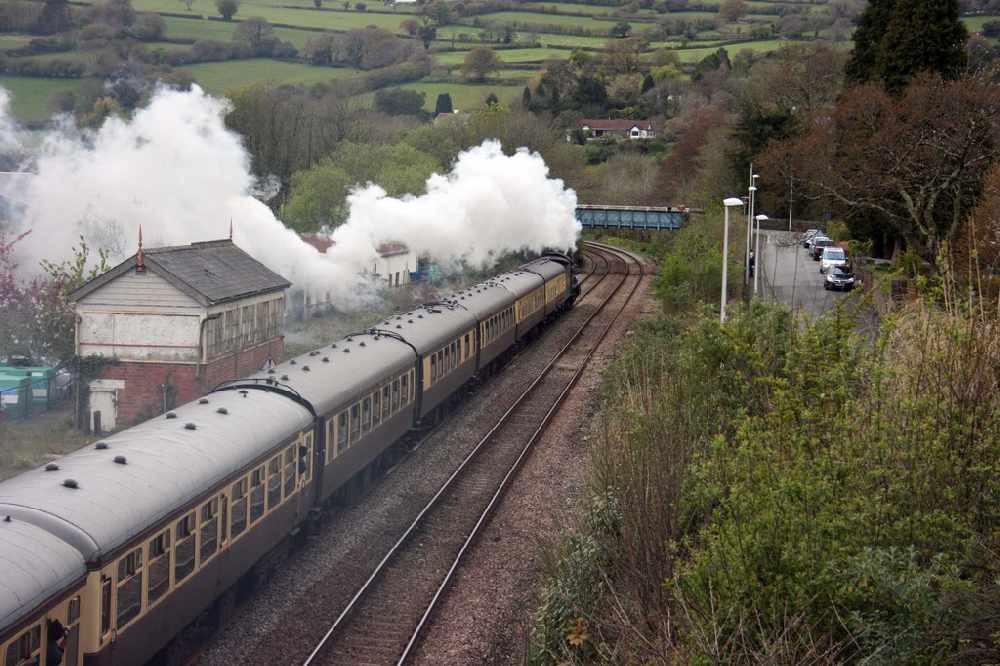 Just over a year ago, the government announced plans to reverse some of the cuts to the nation’s railways, launching a £500m fund to help fund feasibility studies to get trains once again running on forgotten lines or stopping at forgotten stations.

A regular Okehampton to Exeter service is set to resume later this year, while proposals to reopen Cullompton railway station have progressed to the next stage.

Here we take a look at the Beeching Axe, the lines in Devon that were lost, and the status proposals to reopen lines.

WHAT WAS THE BEECHING AXE?

Dr Richard Beeching’s reports, The Reshaping of British Railways (1963) and The Development of the Major Railway Trunk Routes (1965), identified that 2,363 stations and 5,000 miles (8,000 km) of railway line for closure – 55 per cent of stations and 30 per cent of route miles across Great Britain.

He recommended that mostly rural and industrial lines should be closed, and that some of the remaining lines should be kept open only for freight. A total of 2,363 stations closed, although 435 already under threat of closure prior to the Beeching Axe.

WHAT BIDS HAVE BEEN SUBMITTED SO FAR?

In the first two rounds of submissions, the following seven proposals in Devon have been put forward:

Of those, only the scheme to re-open the Wellington and Cullompton Railway has so far been successful. It now has funding of £50,000 from the Department of Transport’s (DfT) Restoring your Railway Ideas Fund towards developing an outline business case.Mid Devon councillors have backed proceeded to the next stage of the £16 million scheme.

THE DARTMOOR RAILWAY – EXETER TO PLYMOUTH VIA OKEHAMPTON

The Exeter to Plymouth railway of the London and South Western Railway, which opened in 1981, followed the northern and western margins of Dartmoor, passing through Crediton, Okehampton and Tavistock.

Trains between Exeter and Plymouth via Okehampton were withdrawn in 1968, when the 20-mile section between Meldon Quarry and Bere Alston was lifted, and between Meldon and Okehampton the line was only retained for freight trains. Okehampton to Exeter passenger services stopped in 1972, but since 1997 a limited service has run on Sundays during the summer.

Regular passenger services will resume after the reopening of the line was included in the government’s Comprehensive Spending Review and the National Infrastructure Strategy. Although no date has yet been firmly announced it is hoped to be this year.

The section between Bere Alston and Tavistock has been put forward as part of the Beeching Restoration Fund but not yet been fully successful.

This has raised hope that the section between Tavistock and Okehampton could reopen and complete the ‘Dawlish avoiding route’. The  line was listed in 2019 by green pressure group Campaign for Better Transport as a ‘priority 1’ candidate for reopening.

Potential problems with reopening the line all the way from Exeter to Plymouth include reversals of the train required at both Exeter St David’s and Plymouth, adding a further 10 to 14 minutes to through-journeys, impacting capacity at those stations, and the cost to double the track throughout has been estimated at £875 million, and raising the track at areas of flood risk costing an additional £290 million.

The Okehampton–Bude line was a railway line built to serve Holsworthy in Devon, and Bude on the Cornish coast. The line branched from the main line at Meldon Junction to the west of Okehampton.

The area served was sparsely populated— records that fewer than seven tickets a day were sold at Ashbury in 1936—and passenger numbers were declining steadily even before the Beeching Axe. The line closed in 1966.

The North Devon and Cornwall Junction Light Railway was a railway built to serve numerous ball clay pits that lay in the space between the London and South Western Railway’s Torrington branch, an extension of the North Devon Railway group, and Halwill,

The line continued to take passengers until 1965, and the northern part from Meeth and Marland carried ball clay, but not passengers, until 1982.

The Bideford Extension Railway from Barnstaple opened in 1855 and then was extended in 1872 to Torrrington.

Economic stagnation in North Devon in the twentieth century meant that the train service failed to develop, and the North Devon lines remained single track. Regular passenger trains from Barnstaple were cut in 1965, but special trains occasionally used the line until it closed in 1982.

Proposals to extend Light railway to the Barnstaple Branch (Chivenor Braunton) “TawLink” have been put forward but not yet been successful.

The Ilfracombe branch of the London & South Western Railway (LSWR), ran between Barnstaple and Ilfracombe in North Devon. The branch opened as a single-track line in 1874, but was sufficiently popular that it needed to be upgraded to double-track in 1889.

The 1–in–36 gradient between Ilfracombe and Mortehoe stations was one of the steepest sections of double track railway line in the country, and was said to be the fiercest climb from any terminus station in the UK.

Passenger numbers though dropped dramatically in the years following the Second World War and the line was mentioned as a candidate for closure in the Reshaping of British Railways report in 1963.

The line closed in 1972 and the track removed three years later. The distinctive curved steel girder bridge over the River Taw in Barnstaple was demolished in 1977. The trackbed between Mortehoe Station and Ilfracombe has been restored as the Devon Coast to Coast Cycle Route (rail trail) and forms part of the Tarka Trail.

Combe Rail was set up in 2015 and hopes to eventually reopen the line.

Services generally ran through from Dulverton to Exeter St Davids from 1884 until the line closed in 1963.

The line ran from Tiverton Junction station on the Bristol to Exeter line, through the Culm valley to Hemyock.  It opened in 1876 and closed in 1963.

Although the line remained opened under the Beeching Axe, Tiverton Junction, Cullompton, Hele and Bradninch and Silverton between Taunton and Exeter closed in 1964.

But there is a hope that a new Cullompton station can be built, as part of the “Devon Metro” plans by Devon County Council. In Somerset, initial plans to reopen Wellington station are being investigated.

The Teign Valley line ran from Newton Abbot to Exeter, connecting the two locations via a rural route that ran through the Teign Valley and the villages of Heathfield, Chudleigh, Christow and Ide.

It opened in 1882, branching from the Moretonhampstead and South Devon Railway’s station at Heathfield, to Christow, and then was extended to Exeter in 1903.

Passenger services were withdrawn initially in June 1958, and following the Beeching Axe and the withdrawal of freight the line finally closed it in 1967.

The line to Moretonhampstead closed in 1959 to passengers, with goods trains withdrawn beyond Bovey in 1964 and Heathfield in 1970.

There is a campaign by the Heath Rail Link Group though to reinstate trains between Newton Abbot and Heathfield.

The Kingsbridge branch line, known as the Primrose line, opened in 1893. It ran from Brent railway station, that served the village of South Brent, down to Kingsbridge. Initially there was plans to extend the line to Salcombe, but that section was never constructed.

After the Second World War increasing use of road transport for goods and travel resulted in declining use of the branch line, with it making substantial losses.

The line closed to goods in 1963. Brent railway station was closed the following year. Totnes MP Anthony Mangnall leading the campaign to explore the feasibility of reopening it.

This station on the Exeter to Plymouth line opened in 1852 and closed for passenger traffic in 1964, and for goods in 1967.

In November 2017, it was proposed that Exminster could reopen along with Kingskerswell as part of a ten-year strategy for Teignbridge, although plans are long-term ambitions.

The railway branch line from Newton Abbot to Kingswear initially served 11 stations, and unusually for a branch line, the majority remain intact.

Kingskerswell station closed in1964, and the line to Brixham closed in 1963.

Trains continue to travel between Paignton and Kingswear, and then onto Dartmouth via the passenger ferry, but via the Dartmouth Steam Railway. Dartmouth station continues a railway station that is open and sells tickets, but has never seen a train, as all passengers connect via the ferry to Kingswear.

Totnes MP Anthony Mangnall and Kevin Foster in Torbay though are seeking support for a bid to investigate restoring public use of stations at Goodrington and Churston, between Paignton and Brixham, and a bid has been submitted.

Both are now stops on a heritage line which took over the route after the line beyond Paignton was closed by British Rail in the 1970s.

The branch line connected Seaton to the main line network at Seaton Junction railway station, on the main line between Salisbury and Exeter. It opened in 1868; it became very popular with holidaymakers, greatly enhancing the attraction of the town, but it closed in 1966.

But the alignment between Riverside (just north of the old Seaton Station) and Colyton was purchased by Modern Electric Tramways Ltd, who then established the Seaton Tramway, which runs between Seaton and Colyton, where the original station building is still in use as the Tramway’s gift shop and restaurant.

Connecting Lyme Regis with the main line railway network at Axminster, the line opened in 1903 and served the village of Combpyne as well as Lyme Regis, but passenger use declined in the years following the Second World War, and only summer weekends remained busy. The last train ran in 1965.

The London and South Western Railway (L&SWR) opened a main line from Yeovil to Exeter in1860, but the nearest station to the East Devon coastline was at Feniton, then known as Sidmouth Junction. In 1874, a branch line to Sidmouth was opened, and a second branch line to Exmouth, via Budleigh Salterton followed in 1897.

Passenger numbers remained viable well into the 1950s, but rail service rationalisation in the 1960s significantly reduced the frequency of train services, with the reduction in passenger numbers led to closure of the branch line.

Services to Sidmouth ceased in 1967, as did services on the Sidmouth Junction to Exmouth line.

A LINE REPRIEVED: THE AVOCET LINE

Dr Beeching had proposed closing the Avocet Line between Exeter and Exmouth, but following a local campaign, it avoided the axe.

Other branch lines that has been increase in usage include the Tamar Valley Line (Plymouth-Gunnislake), up by 58 per cent,