A young boy who was knocked off his bike whilst cycling to meet friends is saying thank you to Devon Air Ambulance this week, as part of the national Air Ambulance week that runs till Sunday 13 September.

Noah, from Morwenstow in north Cornwall, ended up flying over the bonnet of a car and landing on his back. As his friends and witnesses rushed to help, the Devon Air Ambulance headed his way. When they reached Noah, the aircrew assessed him and considered the damage to the car, Noah’s bike and his cycle helmet, which was smashed at both the front and the back. Concerned about the risk of serious head injuries, Noah was flown to Bristol Children’s Hospital where, thankfully, his scans and X-rays revealed cuts and bruises but, incredibly, nothing was broken.  He was kept in overnight and discharged the following day.

Reaching someone in need of essential medical treatment quickly, whether that’s due to an accident or illness, really does make the difference to patients. This Air Ambulance Week’s theme is ‘because every second counts’, raising awareness that their true benefit is not speed but the enhanced and critical care they bring to the patient at the scene, undertaking complex and highly skilled procedures and interventions, such as anaesthesia and blood products, that would otherwise only be available once they get to hospital.

Noah’s mother, Kate, who had travelled in the helicopter with him, said: “We are just so grateful that Noah had the very best help. It was all such a shock, but I was so relieved I could go in the aircraft with him. We learned from the doctors at Bristol that, without his cycling helmet, things would probably have been very different – we are now on a campaign to promote safe cycling to everyone.”

Caroline Creer, income generation director says: “We will be sharing some of our patients’ stories during Air Ambulance Week, just like Noah’s, as well as further information about the work that we undertake every day.”

She added: “However, we will also be using Air Ambulance Week as an opportunity to say thank you to all the people who truly make a difference and help to keep Devon’s Air Ambulance service operational. There are so many of them; from our lottery players, shop customers, donors and fundraisers, to those who donate the gift of time such as our amazing volunteers and trustees. Plus of course our amazing crew and staff who always go above and beyond what is asked of them.” 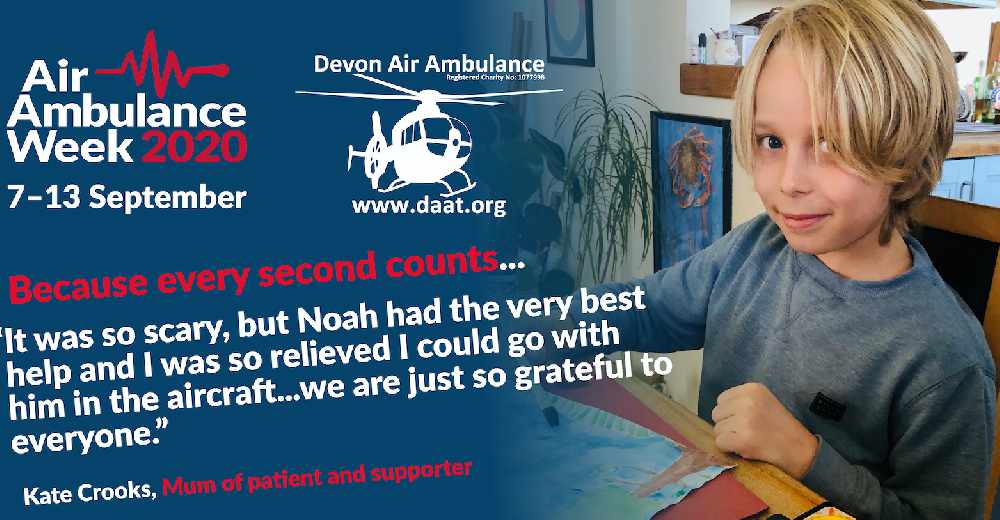